Update: As of version 5.7.0.8, released on October 24, 2017, this setting is now default in Team Development for Sitecore Classic. If you upgrade to this version, you may have to hit “Reset” on the ignore fields list. Thank you Charles Turano!

After a fresh install of my whole dev environment onto a new nice machine, I realised that Hedgehog Team Development for Sitecore (TDS) isn’t by default configured the way I like it.

In the Options window in Visual Studio, there is a section for TDS Options. In the Sync Window you can specify a set of field names that the Sync with Sitecore should ignore when comparing Sitecore items with your project items. By default, TDS ignores “__Created by“, “__Owner“, “__Revision“, “__Updated” and “__Updated by” which makes perfectly sense. Essentially, this means that if you open an item in Sitecore and just hit Save, some of those fields will be changed but nothing else. Therefore is no meaning in synchronising those items with you project, unless other fields are changed as well. 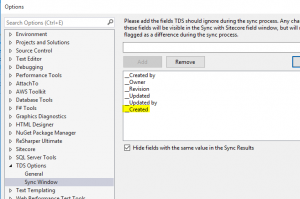 For some reason the “__Created” field isn’t there by default and I guess one could argue that it should be, but I found it better to ignore that field as well. The main reason for that is as projects evolve, we may upgrade Sitecore to a newer version or a new team member may join that hasn’t followed the same upgrade path as the rest of the team. Instead (s)he just installs the current version used by everyone else in the team. In this case, Sitecore items will have new Created dates and therefore a whole bunch of items are marked as different from the ones you have in the project.