In later versions of Sitecore, there is a new link field called General Link with Search. As the name says, it’s basically the same as the old one but with an extra search option. In later versions of Sitecore, there’s also an out-of-the-box fix for clearing links in the Experience Editor, implemented in the same way as sitecoreclimber blogged about a few months ago. 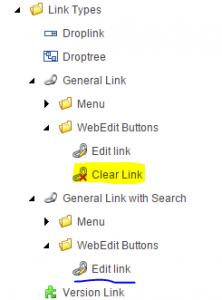 However, in a clean Sitecore 8 install, the “Clear Link” web editor button item is missing in the core database for General Link with Search. You can solve this by just copying the existing command from General Link.