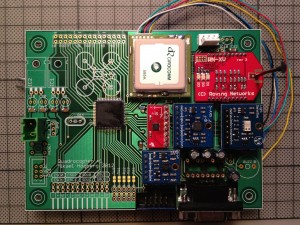 I’ve now done one of the most fun part of the project – soldering the components onto the PCB. While waiting for the PCB to be manufactured, I watched some Youtube videos about soldering flux, like this one. Using desoldering braid works quite well most of the times, but I haven’t used soldering flux before, so I decided to try it out. I worked really nice!

Stupid me didn’t see that there where two dots on the MCU, so of course I managed to mount it in the wrong direction. Doh! So I just had to bring a knife and cut it off, clean the solder pads and buy a new MCU.